We’re excited to support the MedPilot team because their technology addresses an important and growing need for medical billers and healthcare providers.

Using artificial intelligence and machine learning, the company’s software develops personalized communication methods for healthcare patients using variables such as patient demographics, bill size, age and previous payment information. The system then uses a customized combination of emails, texts, calls and statements to increase the likelihood of connecting with patients and helping them resolve their outstanding balance. 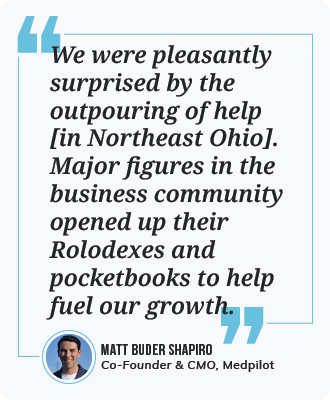 In short, the company’s portal delivers billing information in a way that is easier and more convenient to use, which results in a better experience for patients as well as significantly reduced revenue cycle times for healthcare providers.

In addition to their great product, we’re also excited about MedPilot because they are a great boomerang story.

The company was founded in New York, but relocated to Cleveland in 2018, bringing co-founders Nathan Spoden and Matt Buder Shapiro back home to the region where they both grew up (third co-founder Jacob Myers is originally from California).

When the company moved to Cleveland, it had five employees. Today MedPilot has 40 employees and is in the process of moving to a larger 7,500 square foot space to accommodate its growing operations.

In a recent blog for Crain’s Cleveland Business, Buder Shapiro wrote about the decision to bring MedPilot to Cleveland as well as the founders’ concerns about raising capital away from the coast—especially as their growth really began to take off.

“Our rapid growth meant we needed to raise more capital, and if everyone was right about how tough that would be, we’d be toast,” he wrote. “We were pleasantly surprised by the outpouring of help. Major figures in the business community opened up their Rolodexes and pocketbooks to help fuel our growth. We’ve been fortunate that a major portion of our total funding now comes from local Cleveland funds.”

We’re excited to welcome MedPilot to the JumpStart portfolio and we’re looking forward to working with the founding team and our other co-investors to help the company create more jobs and economic impact right here in Cleveland.

Learn more about JumpStart’s investing activity on our funding page.