For many years, JumpStart and KeyBank have worked together to bring positive change to communities in Northeast Ohio. Three years ago, we expanded our work across Ohio and Northern New York through the KeyBank Business Boost & Build program.

Now, we’re excited to announce KeyBank executive, and current JumpStart Board member Don Graves has accepted a leadership role as one of three vice-chairs on our Board of Directors, joining Jeanne Coughlin and Patrick Pastore as well as Board President Gary Shamis.

“Right now, our communities are reeling from the adverse effects of a pandemic on top of widespread, longstanding and systemic economic dislocation,” said Graves. “In times like these the need for an organization like JumpStart can’t be overstated and I look forward to the opportunity to help this organization take the next steps in fulfilling its mission.” 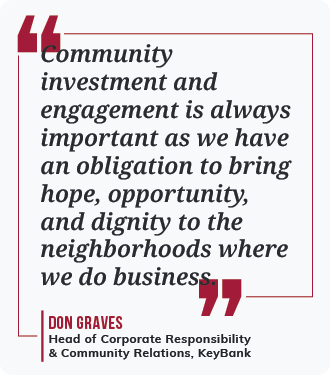 Part of this work includes the management of KeyBank’s $16.5B National Community Benefits Plan. This landmark reinvestment into low- and moderate-income neighborhoods set a new philanthropic standard for the banking industry, and also served as the catalyst for the partnership between KeyBank and JumpStart to launch the four-year KeyBank Business Boost & Build program in Ohio and Northern New York.

According to KeyBank’s most recent Corporate Responsibility report, $12.1B in funding from the Community Benefits plan has already been deployed, exceeding the goals for the first three years of the plan by 48 percent.

“Community investment and engagement is always important as we have an obligation to bring hope, opportunity, and dignity to the neighborhoods where we do business”, said Graves in the May report announcement. “But today it’s even more important with so many people out of work and so many businesses struggling in our neighborhoods.”

Prior to joining KeyBank, Don served as Counselor, and Domestic and Economic Policy Director for former Vice President Joe Biden. Don was previously appointed by President Barack Obama as Executive Director of the President’s Council on Jobs and Competitiveness. He also served as Deputy Assistant Secretary for Small Business, Community Development and Housing Policy at the U.S. Department of the Treasury, where he oversaw the CDFI Fund, the $4B Small Business Lending Fund and the $1.5B State Small Business Credit Initiative.

“Don’s insight and ability to connect the interests of private, public and philanthropic stakeholders has made him an invaluable advisor to JumpStart as we work to economically transform the communities we serve.” Said JumpStart CEO Ray Leach. “We are excited to add Don to our board leadership and we thank him for agreeing to serve in this important role.”