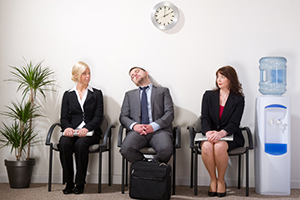 Taking a while to find that perfect job? Don’t worry; not only are you not alone, the delay might actually be a good thing.

According to The Wall Street Journal the average job in 2015 remains vacant for nearly a month (27.3 days) before being filled. That’s almost double the 15.3 days it took to fill a job in the post-recession 2009 economy.

There are a few different factors at work here, including the fact that several sectors (including high-tech) currently have extremely low unemployment rates. As a result, it takes hiring managers longer to fill positions in these industries because the pool of jobseekers is much smaller. It makes more work for employers, but it’s good news for jobseekers with high-tech skillsets, because there are lots of open jobs and they are in high demand.

For the rest of the talent pool, waiting nearly a month for an offer might make you feel like jobs are scarce. In fact, the opposite is true. According to the same Wall Street Journal article referenced above, the U.S. currently has 5.4 million job openings—the most since the current record-keeping system began in 2000.

So, there are more open jobs than there have been in a long time, but that doesn’t necessarily mean hiring managers are in a huge rush to fill these positions. Employers, especially startup employers, are more aware than ever before of just how disastrous a series of bad hires can be. As a result, they’re taking their time and developing longer, more comprehensive screening processes.

At first blush this may seem like a bad thing for job seekers, but it’s not. In fact, you should probably be taking a page out of their playbook by considering what kind of job will actually fulfill your career goals before accepting the first offer that comes along.

Bringing on new employees is a very costly endeavor and it gets even costlier when things don’t work out. A company that understands this reality and takes the time to find the right talent is more likely to be successful in the long run.

The same holds true for employees. Taking a new job is a big commitment. An employee who takes their time and evaluates the company while the company is evaluating them will be more likely to succeed long term.

So, don’t let the slow pace of hiring discourage you. Keep your job search going strong by visitingthe JumpStart job board, which currently lists a wealth of open positions all across Northeast Ohio.